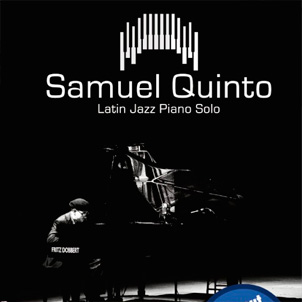 The young Brasilian pianist, Samuel Quinto has been away from Brasil for too long. Making his home in Portugal for several years does not mean that he was lying low. Of course he was making music – always of a brilliant kind. First there was Latin Jazz Thrill in 2007 and then came Salsa N Jazz in 2009. Now there are these beautifully balanced solo piano pieces on Latin Jazz Piano Solo, recorded at Teatro Gazeta in São Paulo, Brasil and framed in this moodily photographed DVD. And I am grateful and honored that he has asked that I write a few words of introduction to this project, which, I believe is a first from this sublimely talented pianist.

The programme comprises a tune by Antonio Brasiliero, several American standards and a handful of originals. Most impressive! Plainly Samuel Quinto means the sequence to underline the relationship between the Tom Jobim and the Americans, in short to suggest both that the master holds his own as well as belongs to a pantheon of stellar composers. But joining them – while it may be considered audacious – is a master-stroke for Samuel Quinto. I believe that there is no more humbler an artist than this pianist. His compositions are like a kind of ancient offering to the Muses – in this instance the musical gods. And then there is his performance…

What emerges in Samuel Quinto’s playing of all these pieces is the wonderful singing quality of his legato combined with a most natural-sounding rubato, often marked, but never exaggerated. This is despite the rhythmic demands of both idioms – Afro-Caribbean and Jazz – makes huge demands on the pianism of the performer, especially when this performer is a Brasilian, playing slightly outside his comfort zone of Bossa Nova, Samba, Forro and other native Brasilian forms. Still his performances are heart-stopping, so perfectly tuned, so varied in colour and with such considerable intervals between the notes that you would be forgiven if you thought you were listening to a one-man chamber orchestra.

These are qualities to be cherished in a pianist and totally expected in the case of such a talented pianist as Samuel Quinto. He brings finely controlled tonal contrasts to a vastly re-imagined and ever-popular “Luiza” and “Smile” and “Summertime” are given the subtlest treatment, nicely graded and transparent in texture so much so that one never misses the orchestral colouring that would normally be associated with these pieces (although “Smile” is classic soloist’s fare). I believe however, that the main focus of the disc is the three Samuel Quinto compositions – at least they should be the focus of the disc.

It would be hard to imagine them played more lovingly or more stylishly, with links to every piano maestro that came before him. But this should not be taken as a comment to suggest that there is no value in the rest of the programme. On the contrary Samuel Quinto’s playing throughout the eight pieces on this DVD is warmly affectionate and quite brilliant throughout. In fact I would go so far as to posit that it has taken a lot to shine in a country blessed by so many guitarists and that this young Brasilian pianist has a lot more to offer in the near future. Meanwhile welcome to the solo world of Samuel Quinto…